Interstitial: Our Hearts Intertwined is a tabletop RPG about our connections with other people, the power we draw from those connections, and traveling to different worlds.  It runs on the Powered by the Apocalypse engine.

In Interstitial, you will travel through the barriers between Worlds with your party. You'll meet new friends, enemies, teachers and learn about yourself. You will also be able to visit and partake in events in your favorite intellectual properties or your own worlds ala Kingdom Hearts. In short; Take two worlds that don't fit each other, smash them together, wipe away the dust and find out how they do.

Think of this game as a vehicle for you to play out Fanfiction. You control the story, either with your self-insert or another canon character from a different property just smashed into this other one.

IF YOU WANT TO HEAR THIS GAME PLAYED:

In order to download this game you must purchase it at or above the minimum price of $20 USD. You will get access to the following files:

Riley’s flagship game is Interstitial: Our Hearts Intertwined. On the surface it is a PbtA game inspired by Kingdom Hearts, but underneath that is some of the most interesting and complex interpersonal mechanics I’ve ever seen.

Interstitial takes the interpersonal mechanics built into a lot of PbtA (Example: History/Hx in Apocalypse World and Bonds in Dungeon World) and pumps them way up. In Interstitial, characters generate “Links” with other PC’s and NPC’s. Links correspond to the four relationship stats: Light, Dark, Mastery, and Heart. Players spend most of the game generating and using these links.

Despite there being mechanics for fighting and questing, it’s really the gamification of relationships that shines. I think this game is representative of some of the wild places PbtA games are going in the future! 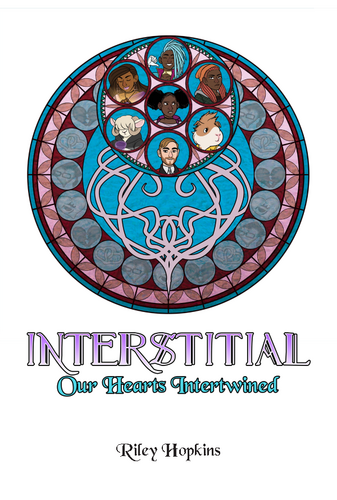